Plankton as indicators of ecosystem change

From the crabs on the seabed to the seagulls in the sky.


I explained in my previous article why there wouldn't be any polar bears on the ice without any plankton at the sea surface. In this blog I want to begin to tell you how studying the plankton has helped to understand climate-induced changes in the North Sea, a productive marine ecosystem that once provided 5% of the total global seafood harvest. Here, a recent warming of this shallow sea has altered the ecosystem from the animals that live on the seabed to the the seagulls in the sky above, and these changes were first noticed in the plankton.

Analysis of long-term plankton samples collected in the North Sea by the Continuous Plankton Recorder Survey (http://www.sahfos.ac.uk) revealed that the number of decapod larvae, and particularly the larvae of swimming crabs, had increased in abundance since the mid 1980s. This increase appears to be related to temperature. Following warm winters there are more decapod larvae in the plankton than following cold winters, and as the North Sea has warmed since the mid 1980s the number of decapod larvae has increased. (As you can see from the correlation between sea temperature and decapod larvae in the graph below). 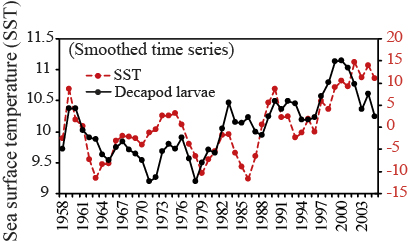 Analysis of crab larvae confirmed that not only had swimming crab larvae increased in abundance, but the North Sea had also been colonised by two warm-water species, the swimming crab Polybius henslowii and the angular Goneplax rhomboides (http://rsbl.royalsocietypublishing.org/content/early/2010/06/14/rsbl.2010.0394.full). Swimming crabs are a good food source for lesser black-backed gulls (especially, during the breeding season), and their numbers have increased following the increase in swimming crabs (http://rsbl.royalsocietypublishing.org/content/early/2012/06/25/rsbl.2012.0474.full).

While the increase in swimming crabs may be good news for lesser black-backed gulls, the general increase in decapods in the North Sea suggested from plankton analysis may not be such good news for their prey species, such as bivalves and flatfish, which have both shown a decline in abundance as the number of decapod larve in the plankton have increased. The decapod megalopa larva is a voracious predator in the plankton and the newly settled decapods prey upon young bivalves and flatfish recruits on the seabed.

So, I hope that this small story shows how by studying the plankton, in this case the abundance of decapod larvae, we can not only detect early signs of change, but perhaps also understand how changes in the marine ecosystem may extend from the seabed to the skies above.

Dr Richard Kirby is a British plankton expert, scientist, author and speaker. Follow Richard @planktonpundit on Twitter. You can see more images of plankton and learn more about them in Dr Richard Kirby’s book “Ocean Drifters, a secret world beneath the waves” available on Amazon and as an iBook.