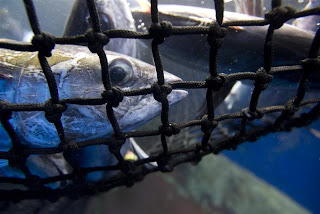 There are alternatives to the way we treat the marine environment, but they require a change in the way we think and act. Land conservation had its period of enlightenment in the 1950’s and 60’s and it is now long overdue for the world’s ocean to command equal resources and focus. The world’s ocean is unique, and should be treated as such; it hides the damage humans do to it, and hides it so well that it may be too late to do anything by the time we fully realise the extent of our stupidity.

If we take the current rate of over-exploitation of the ocean to its natural conclusion (in about 2050), 71% of earth will be a biological desert, save for a few billion jellyfish. We must wake up to this fact, and we must act now.

Stopping the loss of species and ecosystems is essential but not sufficient. The goal should be to ensure that animals do not become endangered in the first place. This means keeping not only the parts of an ecosystem, but also the processes that generate and maintain the parts.

Saving the planet is not a luxury that can be left to someone else. It requires all of us to make fundamental changes. At present, individuals and corporations are free to act until it is proven that their actions are harmful. This needs to be changed. Commercial fisheries, the oil and gas industry, mining companies, developers, and others must be made to prove that their activities are not harmful to the world’s ocean before engaging in them.

Public education needs to be stepped up significantly too, and this can be done relatively quickly if the conservation sector educates the mass-media first. It should no longer be acceptable for the media to scream ‘shark attack’, or killing game fish for sport to be seen as something to be proud of. In other words, wild marine animals should be afforded the same treatment as wild animals on land. Only then will marine animal consumption go down.

Whichever way you look at it, the world’s ocean has reached crisis point and much more action is needed if we are to avert a global catastrophe. Some people say that humans are at their best when faced with dire choices, that they only act decisively when they are on the precipice of such a catastrophe; well that time has come for the world’s ocean. If only humans had evolved the ability to breath underwater, this message probably wouldn’t be taking such a dangerously long time to sink in.