How much is a blue shark worth? 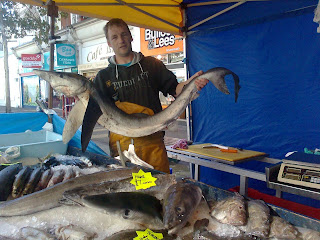 The blue shark in the photo was bought for £5 from Brixham fish market this morning.

Is £5 a fair price for the life of one of the UK's most spectacular wild predators? Even the fishmonger was horrified at the wholesale price, but he has to make a living and almost unbelievably he's not doing anything illegal.

How is this any different to the African bushmeat trade, endangered animals on sale for a relative pittance and serving no imperative nutritional need?

It has been suggested that, throughout the course of its life, a single shark could be worth as much as $2 million in tourist revenue. And that's before we even consider its worth to the planet.

If you can buy the carcass of an animal as valuable and threatened as a blue shark for a mere £5 in a conservation minded country, what hope is there for worldwide shark conservation?

We are squandering our marine wildlife for peanuts, and the protection of sharks and other threatened marine species needs to be drastically overhauled if we are to continue to see magnificent animals like the blue shark in the wild.