Accidental death of huge marlin must call sportfishing into question 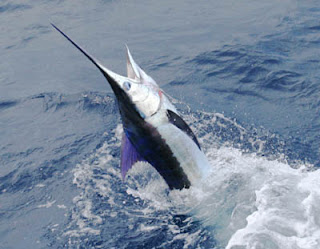 This recent article in the LA Times about a huge 865lb blue marlin that died, possibly from heart failure, whilst a sportfisherman attempted to fight and land it will disturb marine life lovers the world over.

Massive blue marlin are now so rare as to be threatened with extinction. Ninety percent of all large predatory fish like this one have disappeared from our oceans due to overfishing and to see a mature, possibly breeding female, hanging upside down on dry land breaks my heart.

I appreciate that this angler would have released this magnificent animal had it not died, but surely we must now ask ourselves that if the marlin is so stressed by the ordeal that it dies from it should we not now consider stopping harassing these beautiful animals in the name of sport?
Lions, tigers and most other endangered large land predators stopped having to endure an early death in the name of sport many decades ago, surely it is now time to include iconic and rare predatory marine fish in that decision?