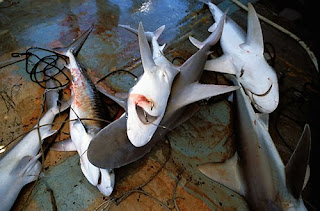 There have been some small but significant developments recently in the fight to save sharks from possible extinction. Let's hope that it's a sign of more to come and that it is not too little too late.

Conservative estimates reckon that between 30 and 70 million sharks are killed annually in commercial and recreational fisheries, and some conservation organisations put that figure closer to 100 million.

Sharks are killed for a whole manner of reasons, their meat is used for food, fins for soup, cartilage in health supplements, livers for oil, skin for leather and teeth for curios, some are even killed just for the sheer pleasure of it.

Some species of pelagic shark such as the oceanic whitetip, blue, porbeagle and mako, have been pushed to the brink of extinction. As they travel the world's oceans they are susceptible to capture, particularly by longline fishing.

However, there might be some light at the end of the tunnel. The Pacific island nation of Palau recently declared that they would be creating a marine reserve for sharks. The sanctuary covers the full 230,000 sq miles of Palau's Economic Exclusion Zone, which stretches 200 miles out from its coasts. Within this region, all commercial shark fishing is banned. Previously, protection measures existed but certain levels of shark-fishing were allowed.

The Maldives in the Indian Ocean have also vowed to stop commercial fishing for sharks in its waters by 2010.

In the USA, a group calling themselves Shark Free Marinas was set up in 2008 to encourage marinas to operate a strictly catch & release policy for the shark fishing boats that operate from them.

Shark protection is also getting more support from celebrities such as January Jones from the HBO smash hit Mad Men, and a video featuring Olympic double gold medalist Amanda Beard has been released.

Even in Asia there is growing unrest over the practice of shark finning, most notably the Hong Kong based shark conservation website Shark Rescue.
In the Philippines the latest issue of Healthy Options Lifestyle Newsdigest is encouraging consumers to support eco-friendly habits rather than unwittingly supporting environmentally damaging practices like shark finning.

Unfortunately the shark conservation message isn't yet getting across to a wide enough audience, only last week in Florida, USA, a mature 750lb mako shark was gaffed from a boat, just for the fun of it apparently.
And whilst this kind of mindless slaughter of sharks is allowed to continue (and attract uncritical media coverage - the LA Times was an exception) sharks, and the people who want to protect them, still have a huge battle ahead.