Why is marine conservation so neglected? 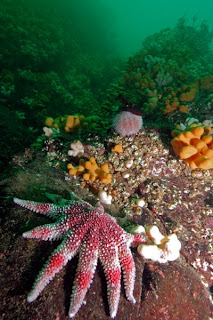 There are hundreds of organisations in the UK devoted to the conservation of the land and its animals. Incredibly there is only one well known organisation entirely dedicated to protecting our marine environment, the Marine Conservation Society.

Despite the fact that the UK is an island which depends on the sea for it's survival (well the Gulf Stream at least) there are more organisations devoted to saving bats than the animals that live below our chilly waters.

Even though some progress has been made most people still regard the sea and the animals in it as nothing more than a exploitable resource. Marine mammals and some reptiles are afforded legal protection, but almost unbelievably, hardly any native marine fish species (including the great white shark should it ever visit us) are protected by law.

Ten percent of the UK landmass is protected but less than one percent of our entire surrounding seas. Our first national park was created in 1951 but it was only 2003 when the tiny Lundy Island Marine Reserve received a no-take zone status.

National newspapers that wouldn't dream of publishing a picture of a man with a gun standing next to a shot lion will still publish pictures of endangered sharks like the thresher and mako killed by so-called sports fishermen for no other reason than an ego trip.

Perhaps what the marine conservation movement needs is a 'Born Free' for our generation, 'An Inconvenient Truth' for our marine environment? The documentary 'The End of the Line', based on the fish loving visionary Charles Clover's book of the same name is attempting this feat, and god knows our marine animals currently need all the help they can get.