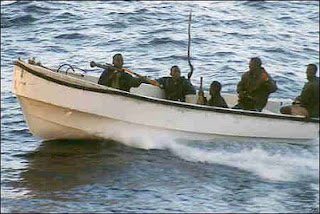 Overfishing in African waters is forcing fishermen to turn to piracy to make a living. The pirates blame foreign trawlers for destroying their livelihoods, forcing them into hijacking ships and demanding ransoms. The most dramatic seizure yet, a Saudi supertanker with its expensive cargo of oil, has underlined a surge in piracy in the Gulf of Aden, one of the world's busiest shipping routes.

The problem has spread south to the Indian Ocean coastal waters off Somalia with 62 ships attacked this year, and there is a strong possibility that the practice will catch on in other coastal regions as fishermen look for alternative ways of making money.

The International Maritime Board's piracy monitors say there are at least 10 vessels and 221 crew members held hostage in ports such as Eyl, east Somalia. Pirates, many operating out of former fishing ports such as Eyl and Bosaso, are deploying increasingly sophisticated methods, including high speed launches, GPS trackers, and satellite communications, to target shipping.