Overfishing is a threat to human existence 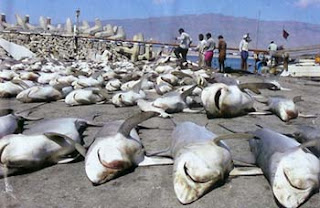 Virtually every threat to life in the sea is attributable to our use of the 'wait and see principle', which allows overexploitation, ecosystem destruction or pollution so long as someone gains economically and the environmental consequences are uncertain.

In 1988 the IPCC (Intergovernmental Panel on Climate Change) was formed to gain a better understanding of global climate change and provide scientific evidence that climate change was causing significant damage to our environment. In 2001 it published its Third Assessment Report (TAR). This report was a comprehensive assessment of the scientific, technical, and socio-economic dimensions of climate change and the panel concluded that it was at least ninety percent certain that human emissions of greenhouse gases rather than natural variations are warming the planet's surface. This proclamation galvanised the world into confronting the threat of climate change, if not actually combating it effectively as yet.
The threats to our marine environment (which accounts for seventy percent of the Earth's surface) have had no such large scale, unified effort, and where the scientific data does exist it is often grossly inaccurate or misleading. Take overfishing for example. The FAO (UN Food & Agriculture Organisation) maintains the only global database of fisheries statistics collected between 1950 and 2004. Numbers used are voluntarily reported by individual countries and are taken from sales of fish, rather than scientific surveys. The system overlooks fish caught and consumed by those who catch them because this leaves no economic trail. Three and fourfold underestimates are not uncommon. This can have profound implications for overfishing as some nations sell rights to foreign fishing boats on the basis of these flawed statistics.
Other scientific fisheries data can be equally misleading. In a study by Dalhousie University, Canada, it was discovered that the true scale of the devastation caused by overfishing has remained hidden because in most of the world's oceans industrial fishing began long before fisheries biologists started making accurate estimates of fish numbers. Populations of large commercial fish species tend to level off at about ten percent of their pristine numbers after prolonged industrial exploitation as they no longer become viable to catch at this level. Fisheries managers may be unaware of the initial plenty and come to see this reduced population as normal, sometimes even regarding the fishery as healthy as the population remains relatively stable when it is actually only a shadow of its former self. On this basis it would be fair to assume that the world's oceans may have once held ten times as many fish as they do today, a sobering thought which makes a mockery of the so-called 'sustainable' industrial scale commercial fisheries.
And this situation is not without precedent. Commercial whaling focused initially on the largest species, the blue whale, but switched to progressively smaller less commercially valuable species - fin, sei, and then minke whales - as each stock of the larger species, in turn, was pushed towards extinction. The blue whale was officially protected in 1966 but has never recovered from this slaughter and has stabilised at around five to ten percent of pristine numbers. In 1982 the IWC (International Whaling Commission) applied a moratorium to all commercial whaling. International cooperation has effectively produced wide-ranging proposals and solutions to combat climate change and to a lesser degree commercial whaling, and the same is now needed for the worldwide fishing industry.
Two-thirds of the Earth is fast becoming a biological desert and if the destruction of our marine ecosystems is to be halted, and ultimately reversed, bold, systematic, and effective measures are needed now. An Intergovernmental Panel on Marine Exploitation, if backed up by proper, exhaustive fisheries science, may galvanise world opinion in a similar way that the IPCC has done for climate change.