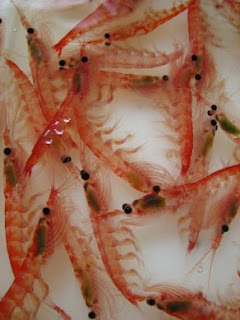 As populations of once plentiful pelagic fish become exhausted many of the boats equipped to fish for these species are unfortunately starting to turn their attention to krill. Krill are a shrimp like animal that are said to represent the largest biomass on earth and are key to the health of the marine environment.

Krill fishing briefly peaked in the 1980's when the Soviet Union caught 500,000 tonnes per year but declined significantly with the fall of communism. However with severely over-exploited fish stocks and an increasing demand for fish oils and feed for the aquaculture industry the krill fishery is expected to boom in the next few years.

Companies like Aker BioMarine are developing new technology that can deliver a stream of live krill onto a vessel and is converting more vessels for krill catching, alongside its existing Saga Sea. The company says it will be able to catch 200,000 tonnes of krill a year in the near future and it is reckoned that catches could rise to one percent of the total biomass of krill, or five million tonnes a year if the total was 500 million tonnes.

Scientists say little is known about krill stocks and as a keystone marine species - they are the favoured food of whales, penguins, fish and seabirds - large scale exploitation could have dire consequences for the entire marine ecosystem.