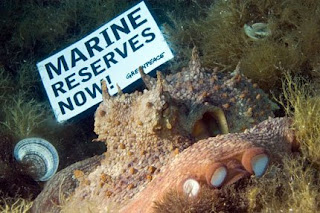 At the end of the 19th and the beginning of the 20th century the world saw the need to protect the dwindling flora and fauna found on land. Famous parks like Kruger National Park, Yellowstone Park and Etosha were formed.

In the UK famous poets like Byron and Wordsworth inspired people to take an interest in the hitherto exploited and under appreciated countryside leading to the freedom to roam bill in 1884. The bill failed and eventually mass trespass (direct action) was seen as the only alternative and five men were imprisoned for this action.

100 years later we are in a similar, but worse, positon with our oceans, seas and coastlines. It has taken longer for the outrage of ordinary people to be felt because the damage done has not been visible.

Official Government statistics which show that two-thirds of all commercially caught fish in the UK are disgarded dead surely is the tipping point where we all should now say 'enough is enough' and finally start the sort of mass public outcry that this deserves.

This Government has promised us a Marine Bill which would start the process of protecting our seas and coastlines, but do not actually deem it important enough to pass this bill through Parliament.

So much for progressive politics, continuing to drag their heels on a priority that should probably have been looked at by the UK Government 100 years ago.